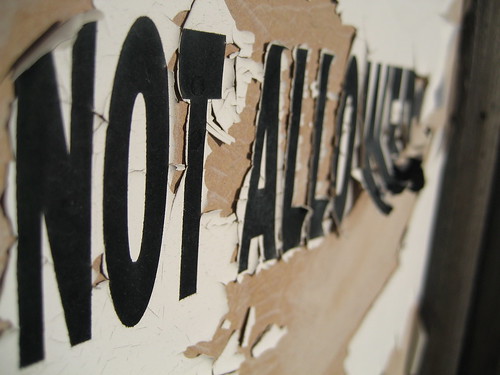 Back in February I blogged about attention and and whether students were checking out of the flipped classroom.   In the post I mentioned the work Howard Rheingold has done around attention literacy and videoing one of his classes and then subsequently only allowing one or two students to take notes on laptops in his classes.

Several months on I continue to mull over these issues and so probably no surprise that a tweet linking to a piece on Medium from Clay Shirky outlining why he’s asked his students to stop using laptops and mobile devices in his classes caught my attention.  Shirky has banned the use of laptops in class unless they are required and in the piece he explains his rationale.  He says:

Over the years, I’ve noticed that when I do have a specific reason to ask everyone to set aside their devices (‘Lids down’, in the parlance of my department), it’s as if someone has let fresh air into the room. The conversation brightens, and more recently, there is a sense of relief from many of the students. Multi-tasking is cognitively exhausting — when we do it by choice, being asked to stop can come as a welcome change.

So this year, I moved from recommending setting aside laptops and phones to requiring it, adding this to the class rules: “Stay focused. (No devices in class, unless the assignment requires it.)”

Shirky goes on to outline the problems with multi-tasking, including the long term negative impact it can have on declarative memory.  He says:

People often start multi-tasking because they believe it will help them get more done. Those gains never materialize; instead, efficiency is degraded. However, it provides emotional gratification as a side-effect. (Multi-tasking moves the pleasure of procrastination inside the period of work.) This side-effect is enough to keep people committed to multi-tasking despite worsening the very thing they set out to improve.

On top of this, multi-tasking doesn’t even exercise task-switching as a skill. A study from Stanford reports that heavy multi-taskers are worse at choosing which task to focus on. (“They are suckers for irrelevancy”, as Cliff Nass, one of the researchers put it.) Multi-taskers often think they are like gym rats, bulking up their ability to juggle tasks, when in fact they are like alcoholics, degrading their abilities through over-consumption.

Shirky doesn’t say how his students have taken to this laptop ban though he does highlight that some students will opt of paying attention anyway (something which has always happened anyway even in the days when we didn’t laptops).

Has Shirky been too radical? It would be interesting to hear what lecturers and students think about banning laptops.  Is anyone else thinking of banning laptops or already done it.  How has that gone down with students.

by  Brett Jordan
Following a couple of conversations with students over the past week and reading a few articles in Clinical Teacher and Medical Education I’ve been thinking about attention in lectures and student learning skills.  The picture above isn’t too far removed from the daily view our lecturers see, a sea of MacBooks and laptops, there are growing numbers of iPads and other tablets and some students will be interacting with 2 or 3 devices.  It’s a sight that some teaching staff find disconcerting.  They question what students are really up to, are they paying attention, are they on Facebook, texting their mates?
After being hit by a sea of laptops in a tutorial she was delivering Hannah Beckwith (1) has asked if we’re hitting a wall in teaching undergraduate medical students.  Hannah was taken aback and questioned why students felt the need to have their laptops.

First of all, I found myself asking the question ‘why?’ Why had the students felt it necessary to bring a laptop to the tutorial? Were they scared? Had previous sessions been too interactive, and did they feel the need to place a physical barrier between the ‘interrogator’ and themselves? Or were topics too complex, and learners struggling to keep up? Such that they needed to search the internet during the tutorial to supplement understanding? Or were they bored, and using the time to check e-mails or Facebook, messaging their friends around the globe complaining about their ‘ridiculous timetables’?

@nlafferty yes I’ve found it very off putting, teaching students in hospital clutching iPads and typing as I speak (or browsing FB?!)

If I was a student today I’d be taking my iPad or laptop along to lectures and tutorials in the same way I used to take along a note pad.  I do it at conferences, I take notes, might tweet or Google to look up something that’s been mentioned so I have it saved for future reference. I do however fully accept that there are students who have an issue with attention in lectures and classes and that lecturers may find it off putting not being able to make face contact with students as they are hidden behind laptop screens.

Students switching off in lectures is nothing new, I remember boring lectures where students ended up playing hangman or battle ships or keeping a tally of how many times a lecturer repeated a particular phrase or word. We had some great lecturers and some weren’t so good.  Lectures get a bad press these days because they don’t necessarily promote active learning and higher order thinking, for me lectures provided a framework to build on in my own study time and I’ve referred previously to the fact that students do still get inspired in lectures.  Howard Rheingold has also written extensively about attention and I’ve often thought it would be interesting to replicate what he has done. Videoing a class and then showing them what’s it’s like from the teacher perspective and then showing what the students were doing on their laptops and then running classes where only one or two students are allowed to use a laptop for notes taking for the class.

After MOOCs perhaps one of the other things most talked about is the flipped classroom and there is growing interest in applying this approach where students watch condensed video lectures or engage with pre-reading resources before coming to the class and then applying that knowledge in various learning activities in the lecture session. Whilst appreciating the attraction of this approach, I’ve never really thought it was anything particularly new given that we’ve always had smaller group teaching sessions where students are required to come prepared and engage with pre-class resources.  I know many colleagues get exasperated because many students simply don’t come prepared and so half the session is spent trying to get everyone to the place where they can start to effectively take part in the learning activities they’ve planned.  It was interesting therefore to read a paper by Casey White and colleagues (2) at the University of Virginia School of Medicine and their experience of the flipped classroom in their new curriculum.

Virginia School of Medicine has redeveloped its curriculum to encourage more student engagement and active learning in the classroom based around constructivist and adult learning principles. The flipped classroom was adopted as an approach and there was a hope that this would also address falling attendance at lectures.  Students seemed to like these flipped sessions when they worked well but teaching staff noticed ‘dwindling’ attendance over the course of the phase of the pre-clinical curriculum and a growing issue around student attention with students being distracted from the learning task in hand.  Student evaluation highlighted only 25% of the class regularly attended these sessions and that the sessions varied in quality.

White and her colleagues ran student focus groups to investigate why students weren’t engaging with these flipped classroom sessions (allbeit the groups were volunteers and represented less than 10% of the year group).  Analysis of the discussions highlighted a number of issues including that

In sessions where students could sit where they wanted they were less prepared as they would typically sit with their friends and would chose their table based on fun rather than who knew their stuff. The session for some served as a ‘social catch-up’ others admitted they watched videos.  There was however a difference in approach to team-based learning sessions where students were assigned into groups, they were more likely to prepare as they were more concerned about appearing stupid.  They also found the sessions more helpful and enjoyable because they were prepared.  Some recognised that sitting with their mates wasn’t always a good move and would switch groups based on the activity.  Students also highlighted the variation in the quality of the activities and their tendency to disengage if they weren’t great.

More and more people are less and less prepared, that’s why you see a decline in attendance. With the problem sets, if you don’t feel prepared and ready to contribute, your time is better spent [at home] doing your own work.

Others mentioned hiding at the back to avoid being called upon an they used the phrase ‘checking out’ to describe being present in body but “intellectually disengaged”.  They outlined how they resisted engaging in learning activities by allowing themselves to become distracted.  Some questioned why there had been away from traditional lectures.

Liz Mossop (3) in her  commentary on this paper in Medical Education titled, ‘The curse of the teenage learner‘, suggests we need to change the learning culture and train students in active learning. In a previous post I considered whether we spoon feed students and consequently don’t help them to develop their learning skills.  This has also been discussed elsewhere such as in this piece in the Times Higher which highlights the need to treat students as independent scholars.  As students are now faced with paying fees the focus seems to be students as consumers, I don’t think this is a helpful move.  It does seem that many students don’t know how to learn independently as so we do perhaps need to consider supporting our students to develop learning skills, but I’m surprised by the comments from the students at Virginia.  In the USA medical students graduates and it’s concerning that they don’t have adult learning skills.
What’s not clear in this paper is what approach the Virginia Medical School actually took in flipping the classroom and what sort of activities were developed and whether there was any assessment associated with the learning.  For example were students using electronic voting systems so that lecturers could address gaps in knowledge and understanding?  Was there any assessment attached to the sessions as is the case in some other implementations of the flipped classroom?
This is obviously just one paper, but I wonder whether others have had similar experiences to Virginia in introducing the flipped classroom?  Maybe these issues can be addressed by better designed sessions and staff development to better prepare and equip teachers for this type of learning  and teaching approach.  Do these sessions work better when linked to assessment – given the good old adage that assessment drives learning?  With growing interest locally in piloting some flipped classroom sessions and similar experiences with falling lecture attendance this paper has certainly sparked my interest to look at what else has been published to determine if there’s a sense of an evidence-based best practice approach to running this.  I’d be interested to hear how others have got on trying out the flipped classroom.
References
Follow @nlafferty

This work is licensed under a Creative Commons Attribution-NonCommercial-NoDerivs 3.0 Unported License.